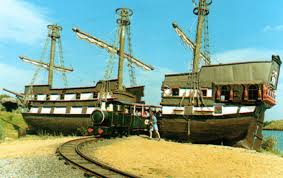 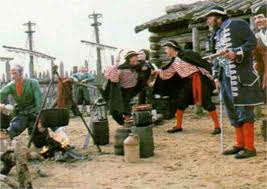 SPACE & PLACE worked with Thorpe Park to help develop the Treasure Island Railway which was a small train based attraction with live actors based on Robert Louis Stevenson’s novel ‘Treasure Island’.

It was located in the Treasure Island Peninsular which was a short walk from Thunder River (Rumba Rapids). Here, you were able to relive this famous adventure story throughout the successful 10 years in which it was open, between 1983 and 1993.

It consisted of a board-able miniature train with four carriages which would take you on your own Pirate adventure. The train tracks ran around the Treasure Island Park which was decorated with themed wooden huts and sand and took you through a large replica Pirate ship where at the end, you may have been greeted by some devious Pirates.

This project was one of the first themed and family entertainment projects that S&P undertook.