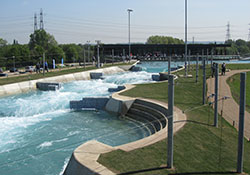 S&P took forward a concept design that was developed up to RIBA Stage D. The centre was completed in 2010 and was the first newly constructed Olympic venue to be completed – with Lea Valley Regional Park Authority taking over the facilities for the public opening in Spring 2011.

This project was the venue for the White Water Canoeing events during the London 2012 Olympics. It is now the home of the British Canoe Unions performance squad, as well as being utilised as a rafting venue for the general public.